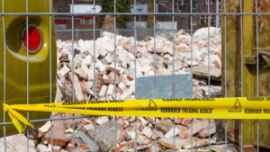 Our client would spend hours breathing in this asbestos laden dust. No breathing equipment, masks or warnings of any type were ever given to him. In the 1970s, our client left the insulation industry and took various jobs where there was no exposure to asbestos. In about 2010, our client started to develop a horsy cough. He didn’t think much of it at the time. In 2011 he was riding his bike which he loved to do to keep fit and started to develop breathlessness. He had to stop. He sought medical advice and found that he had fluid on his lungs. Removal of the fluid was a painful exercise, but what was truly devastating was the advice from the specialist that they had diagnosed mesothelioma. Chemotherapy followed, but this knocked him about quite badly and he had to stop.

With a loving wife to support him and grown up children and grandchildren, our client had everything to look forward to. Unfortunately there is no cure for mesothelioma and even little tasks were becoming very difficult for him to do. Having contacted Ivan Simic at Taylor & Scott, Ivan headed to the country town where our client lives. Very detailed instructions were taken in respect to our client’s work history and Ivan was able to pinpoint the exposure to asbestos and the products used by our client in Australia. Ivan then commenced a claim in the Dust Diseases Tribunal which eventually has led to a substantial settlement allowing our client to feel financially secure and safe in the knowledge that if and when the mesothelioma battle ends, his wife will be financially secure.

Commenting on the case, Ivan said:
“It is a great pity that many of my clients might have avoided contracting mesothelioma if employers had provided masks and other breathing equipment and had ensured that asbestos was handled in a safe way. It is very sad to see families devastated by such an insidious disease such as mesothelioma. I am glad that I was at least able to assist my client in making him financially secure”.