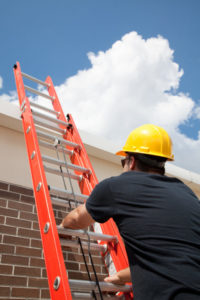 Our client was a young married man with a family. He worked in the electrical industry operating his own business. Appreciating the need to make sure he had proper financial cover should he ever suffer an injury or an illness, he took out a policy of insurance to pay a large lump sum if he were to die and a further policy to pay a monthly benefit until retirement if he found he was permanently injured and unemployable.

Our client was helping a friend working on his roof. Stepping onto a ladder, the ladder collapsed and our client fell to the ground suffering very serious permanent injuries to his back. This back injury involved multiple fractures to his back and prevented him from returning to his electrical business. He made a claim on his policy and the insurance company accepted the claim. Payments were made for approximately two and half years.

Eventually, the insurance company insisted on obtaining further independent medical evidence and also closely questioned our client, particularly in respect to the original proposal and to his qualifications. Realising that his qualifications were slightly misstated, the insurance company denied further payments. Our client was devastated. He had a large young family, he could not work and was forced to rely on social security payments.

He turned to Taylor & Scott for advice and help.

Ivan Simic, Partner and Accredited Specialist in Personal Injury, and an expert in insurance law, gave advice. He took a very detailed statement going right back to the original insurance proposal and reviewed our client’s qualifications and work history. Having received and reviewed all the facts, Ivan advised his client that in his view the insurance company could not deny payments under the policy. Ivan pointed out to his client that the circumstances of his claim were covered by the Insurance Contract Act of 1984. He further advised his client that the policy was a continuous disability policy rather than a general contract of insurance and the insurance company’s remedies for any non-disclosure are covered by this Act.

Ivan had very carefully reviewed the original proposal that his client had completed with the assistance of an insurance broker and determined that even though one answer given by his client was slightly ambiguous, it did not deny him rights under the policy. In fact, the insurer had accepted the proposal and therefore under the Act was taken to have waived his client’s duty to disclose the information requested.

Eventually, the insurance company accepted Ivan’s arguments and contentions on behalf of his client. They capitulated and paid out the policy with Ivan’s client receiving more than half a million dollars.

If you or someone you know is being denied payments under an income protection policy or other policy of insurance, you are welcome to contact the experts in insurance policies and TPD claims here at Taylor & Scott. If we take on your case, it will be on a no-win/no-pay basis, meaning you don’t pay Taylor & Scott any costs unless you win your case. Ring 1800 600 664 or complete the contact form on this page.