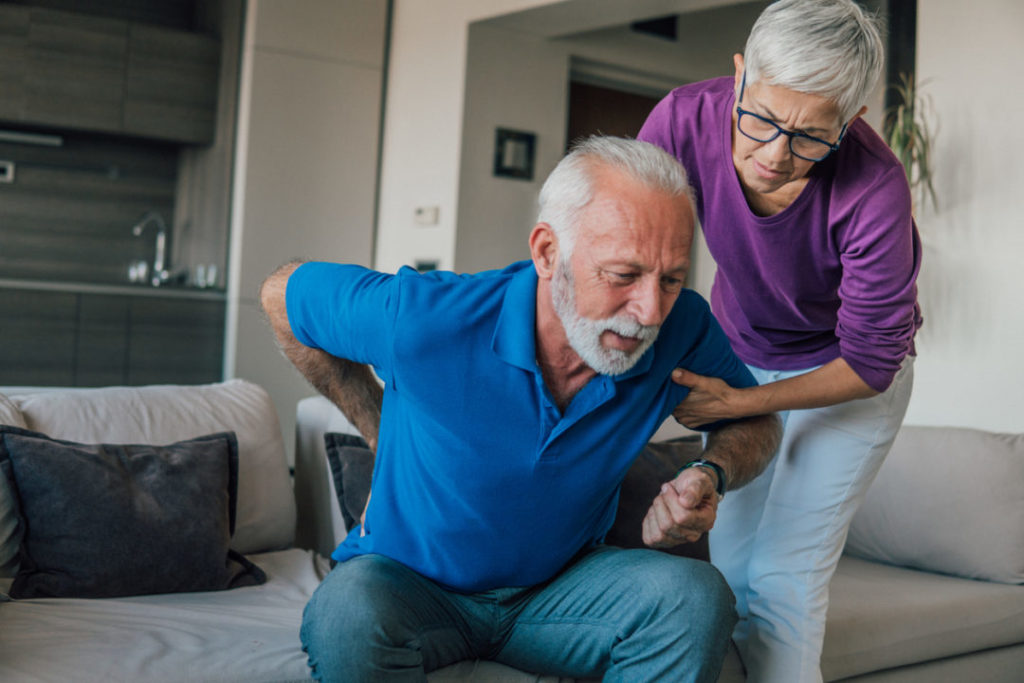 Our client dropped out of school before obtaining his School Certificate. He completed an apprenticeship doing carpentry and joinery. Over the years he has worked for numerous employers and became highly skilled in doing high rise residential and commercial installations.

Several years ago he was contracted to do installations on a high rise project in Sydney’s CBD. The construction of the high rise was with one company and they had contracted the fit-out to another company. The second company then engaged our client as a sub-contractor but at all times directed our client as to what he was to do. To carry out his work, he needed to have a large selection of tools available. They were kept in a large mobile metal cabinet which was wheeled around from floor to floor. The box weighed well over 100kgs. On this particular day, our client was directed to go to a higher floor of the building and start urgently installing joinery. Having wheeled the box as far as he could, he contacted his boss seeking help to manoeuvre the box over a large concrete hob and into a lift to get to the next floor. The request for help was met with a blunt refusal and an order to hurry up and get on with the job. Our client was effectively left to his own devices without any assistance. The pressure on this job was immense. He was left with no alternative but to try and manoeuvre the box as best he could. Needless to say, when he attempted to lift the box over the concrete hob, he struck trouble. Having got the box over the hob, it then started to roll knocking our client off balance and causing him to fall striking a large bolt which was embedded in the concrete floor. He was left in extreme pain and pinned to the floor. The pain was in his back, knee and shoulder. He called out for help and two fellow workers heard his screams and came to his aid. Having been released, he reported the accident and immediately sought medical help.

Unfortunately following the surgery the outcome has not been a great success and our client has been left with unremitting pain, particularly in his back and leg. Because of his ongoing pain, he has developed depression, frustration and irritability. Treatment by clinical psychologists has not really helped. His unremitting pain has forced him to consume large amounts of painkillers on a daily basis.

Because of his injuries and ongoing pain, he cannot work. He cannot lift, stand for any length of time, bend or carry. He has had to give up driving his car because of the inherent danger of driving while taking very strong painkilling medication and doing households chores has now become impossible. A keen sportsman, he can no longer play soccer, train in the gym or go fishing and boating. He now needs assistance to perform basic chores around the home.

As noted, our workers compensation expert lawyers secured orders for the workers compensation insurer to pay for his surgery. Once he had stabilised from the surgery, he was referred to Simon Meigan, a Partner and Accredited Specialist in Personal Injury. Having met with his client on several occasions, Simon was able to recommend a Supreme Court negligence case be brought against both the head contractor and the company who had control over the work that he was to do on this site.

Eventually, Simon was able to negotiate an extremely favourable lump sum settlement of his client’s claim. The lump sum compensated his client for his loss of income right up to retirement and for his pain and suffering.

If you are injured at work, even if you are working for yourself, you are welcome to discuss the facts of your accident with our team of expert compensation and negligence lawyers. Our team has many years of experience, most of our lawyers are Accredited Specialists in Personal Injury and will be able to advise you as to any negligence claim you may be able to bring. If we act for you, it will be on a no-win/no-pay basis meaning that you do not pay Taylor & Scott any costs whatsoever unless and until you win your case. No matter where you live in New South Wales, if you have been seriously injured and this has affected your ability to work, please contact us on 1800 600 664 or email us at info@tayscott.com.au.
We will do everything we can to assist you and to maximize your claim for compensation.