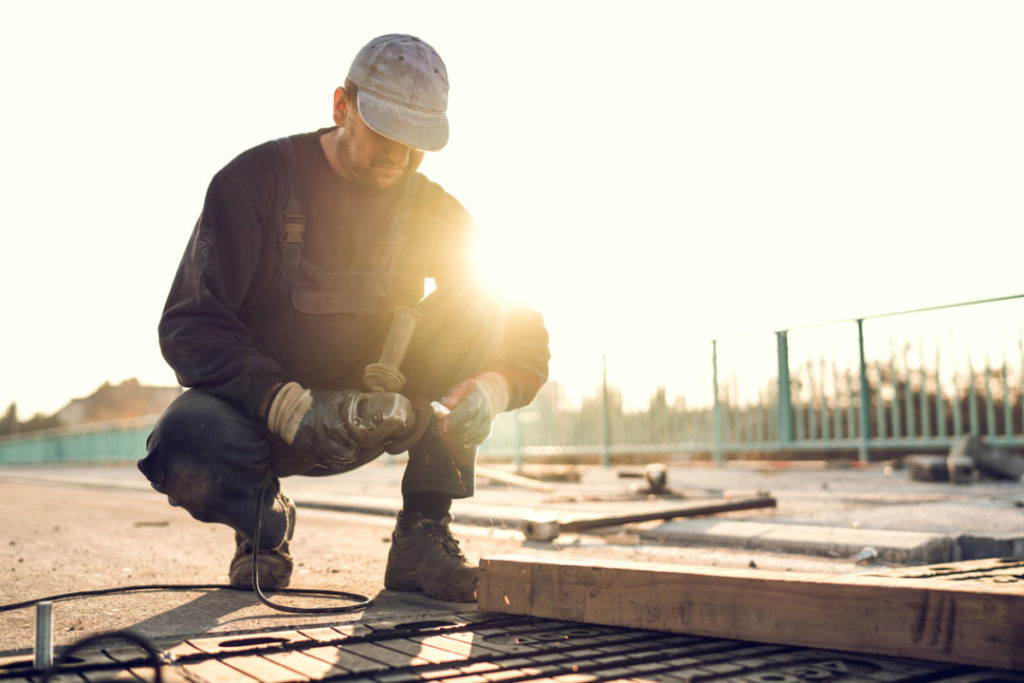 Our client is a Kiwi who has worked as a scaffolder since his arrival from across the ditch thirty five years ago.

His work as a scaffolder involved a lot of lifting and carrying of materials such as braces, ledges and transoms.  These materials weigh between 30-60kgs.  One day he was sent by his company to a site in Sydney.  His leading hand directed him to strip scaffolding, carry it down several flights of stairs, climb through an opening in a wall and re-erect the scaffolding.  This was very hard physical work.  He was given no assistance.  The physical carrying of the equipment and the manoeuvring of it through the hole in the wall not only required physical strength, but it entailed a lot of bending, twisting and crouching.

Having worked all day doing this work, at one point he had to bend down, twist and step through the opening when he felt a sharp pain in his knees.  He kept working thinking that he would be able to work the pain off.  As luck would have it he had a few days off to rest his legs but the pain didn’t go away.  He was very reluctant to report the injury as he feared he would lose his job.  He kept on working in the hope that his knees would recover.

Unfortunately this was not to be.  After a while, he realised that his knees were getting worse and eventually he was forced to contact his GP and go off work on workers compensation.  Soon after, he was sacked by his employer.

His GP initially recommended conservative treatment.  This didn’t help.  He was then referred to three orthopaedic specialists and eventually he was advised that he would have to undergo the surgeon’s knife and have total knee replacements. Following the surgery to his knees, he underwent a long arduous rehabilitation programme which has helped him but unfortunately the outcome has been less than perfect.

He still has pain and restriction of movement in his knees.  He tries to avoid crowds because he feels unsteady on his feet.  He is very fearful of being knocked off balance and re-injuring his knees.  He has great difficulty walking over rough ground.  He can’t climb and walking up and down stairs is extremely difficult for him.

His days as a scaffolder are over.  He still has a relatively young family and finds it very frustrating that he can’t kick a rugby ball and play with his young boys.

Being very concerned about his future and particularly how he was going to provide for his family, he turned to the experts in workers compensation claims and work injury damages negligence claims.  He contacted the team here at Taylor & Scott.  Our team, having taken detailed instructions, provided advice in respect to both his workers compensation rights and in respect to negligence claims.  The team gathered together all the medical information, they investigated the facts and circumstances of the accident and arranged for an independent specialist to again examine their client and advise on his whole person impairment.  Following this a lump sum was claimed under section 66 of the workers compensation laws.

Because his whole person impairment exceeded 15%, Simon Meigan who is a Partner and Accredited Specialist in Personal Injury, advised that a work injury damages negligence claim could be launched.  We are pleased to report that at mediation, a very attractive settlement was achieved by Simon compensating his client for his wage losses, both past, present and up to retirement age.  Needless to say our client is greatly relieved that he and his family now have financial security thanks to Simon and his team of specialists in workers compensation here at Taylor & Scott.

If you or someone you know suffers a work injury which impacts on your ability to work, you are welcome to contact the experts in workers compensation claims and work injury damages claims here at Taylor & Scott.

All workers compensation claims are conducted with a grant of legal assistance from WIRO and all work injury damages claims are conducted on a no-win/no-pay basis meaning you don’t pay Taylor & Scott any costs whatsoever unless you win your case.  Ring us on 1800 600 664 or email us at info@tayscott.com.au  Our team of expert lawyers will do everything they can to maximise your compensation claim.